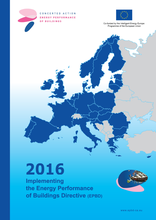 January 2016 - This is the 4th book in a series that started in 2008. It builds upon the book “Implementing the Energy Performance of Buildings Directive (EPBD) – Featuring Country Reports 2012”, highlighting the important advances achieved across the EU in implementing the EPBD in the period 2012-2015. It is however a self-standing book, as it contains all the pertinent updated information for each country, i.e., it does not call on previous editions for information. The previous versions, together with this latest book, do however provide a good historical perspective, as an attentive reader can infer how the different issues have evolved over the years, both at EU and at national level.

Part A of the book describes the main accomplishments and the remaining challenges on a selection of major topics covered by the EPBD across Europe, as well as conclusions and recommendations for the upcoming review of the EPBD, expected for 2016/2017, following the discussions that took place at the Concerted Action EPBD. This part consists of the following chapters:

Part B of the book, to be released on February 29, contains reports from the 28 EU Members States plus Norway. In two cases (Belgium and the UK), separate reports will be available for different jurisdictions that have their own autonomy to implement the EPBD. The individual national and regional reports shall contain a snapshot of the status of implementation at the end of 2014 or, in other cases, sometime during 2015.

Download part A of the book here. More information about the Directive and the project here.

Join the global Pando Community of sustainable researchers and practitioners.